Joseph Michael “Joe” Acabá (born May 17, 1967) is a NASA astronaut, instructor, and hydrogeologist. When he was selected as a member of NASA Astronaut Training Group 19 in May 2004, he became the first person of Puerto Rican ancestry to be named as a NASA astronaut candidate. On February 10, 2006, he finished his training and was assigned to STS-119, a mission that flew from March 15 to March 28, 2009 to deploy the final set of solar arrays to the International Space Station. 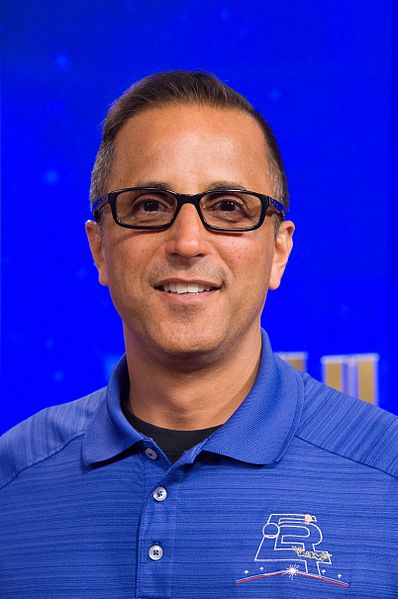 Ralph and Elsie Acabá, from Hatillo, Puerto Rico, migrated to Inglewood, California, in the mid-1960s, where he was born. Later, they relocated to Anaheim, California. Acaba has loved reading since he was a child, especially science fiction. He excelled in science and math in school. His parents routinely exposed him to instructional films as a child, but it was an 8-mm film depicting astronaut Neil Armstrong’s Moon landing that piqued his interest in space. Acaba grew interested in scuba diving during his senior year of high school and became a certified scuba diver through a job training program at his school. This event motivated him to pursue geology as a topic of study. He graduated from Esperanza High School in Anaheim with honors in 1985.

Acaba graduated from the University of California, Santa Barbara, with a bachelor’s degree in geology in 1990 and the University of Arizona with a master’s degree in geology in 1992. Acaba served in the United States Marine Corps Reserve for six years as a Sergeant. In Los Angeles, California, he also worked as a hydrogeologist. Acaba spent two years in the Peace Corps in the United States, where he educated over 300 Dominican Republic teachers in current teaching methods. He later worked as the Island Manager for the Caribbean Marine Research Institute on Lee Stocking Island in the Bahamas’ Exumas.

Acaba returned to the United States and went to Vero Beach, Florida, where he worked as a Shoreline Revegetation Coordinator. He spent one year in high school teaching science and math and four years in Dunnellon Middle School. He also taught at Melbourne High School in Melbourne, Florida for a short time. Acaba returned to Earth in Fall 2012 and enrolled in Texas Tech University’s College of Education. In 2015, he graduated from Texas Tech University with a Master of Education in Curriculum and Instruction.

NASA picked Acaba and ten other people as astronaut candidates from a pool of 99 applicants on May 6, 2004. Sean O’Keefe, NASA’s administrator, announced the members of the “19th group of Astronaut Candidates” in the presence of John Glenn, an occasion that has not been replicated since 1958, when the first group of astronauts was introduced to the public. Acaba, who was chosen as an Educator Mission Specialist, and the other ten Astronaut Candidates finished their astronaut training on February 10, 2006. Acaba was assigned to the Hardware Integration Team in the International Space Station branch after completing his training, where he worked on technical issues with European Space Agency (ESA) hardware.

Acaba was named Mission Specialist Educator to the STS-119 crew, which launched on March 15, 2009, at 7:43 p.m., after NASA engineers repaired a defective gas venting system the week before, to deploy the final set of solar arrays to the International Space Station. Acaba, who was wearing a Puerto Rican flag, requested that the crew be awakened on March 19 (Day 5) by the Puerto Rican folkloric song “Qué Bonita Bandera” (What a Beautiful Flag), written by Florencio Morales Ramos (Ramito) in 1971 and sung by Jose Gonzalez and Banda Criolla.

On March 20, he assisted with the first mission spacewalk, and on March 21, he completed a spacewalk with Steve Swanson, assisting in the successful unfurling of the last “wings” of the solar array that would supplement the ISS’s power supply. Acaba completed his second EVA of the mission two days later, this time alongside crew member Ricky Arnold. The EVA’s major duty was to assist in the relocation of the CETA carts on the station’s exterior. At 3:14 p.m. EDT on March 28, the Space Shuttle Discovery and its seven-person crew safely landed on runway 15 at NASA’s Kennedy Space Center in Florida. The views from the space station, according to Acaba, are breathtaking.

Acaba was one of three crew members that launched from Kazakhstan to the International Space Station on the Soyuz TMA-04M spacecraft on May 15, 2012. On May 17, at 4:36 UTC, he and his fellow crew members, Gennady Padalka and Sergei Revin, arrived and docked with the space station, two days after launch. After nearly 125 days in space, Acaba, Padalka, and Revin returned to Earth on September 17, 2012.

Acaba led the International Space Station Operations branch as Branch Chief. The mission preparation and on-orbit support of space station astronauts are the responsibility of this agency. Acaba worked as the Director of Operations Russia in Star City, providing crew training in the Soyuz and Russian Segment systems, before being selected as a flight engineer for Expedition 54 and Expedition 55.

Acaba spent six nights underground in ESA CAVES training (between Italy and Slovenia) in September 2019, simulating a trip to explore another planet.

Acaba’s third voyage to the International Space Station, onboard Soyuz MS-06, was announced in 2017. Due to Russian crew cuts on the ISS for 2017, the Soyuz vehicle was originally scheduled to fly with a crew of two. However, due to the short notice, it was determined that the third seat would be filled by an experienced astronaut and paid by Roscosmos to pay off debts. Shannon Walker, Acaba’s backup for the mission, was planned to fly as prime crew aboard Soyuz MS-12 as part of Expedition 59/60, however she was not assigned to that crew as of December 2018.

Acaba was launched aboard Soyuz MS-06 on September 12, 2017, for a six-hour rendezvous with the International Space Station. Acaba and Randy Bresnik did an EVA on October 20, 2017 to continue lubricating the new end effector on the robotic arm and install new cameras. It took 6 hours and 49 minutes to complete. Hurricane Harvey devastated Acaba’s home in Houston, and Hurricane Maria hit his native Puerto Rico during the mission.

Acaba was recognized by the Senate of Puerto Rico on March 18, 2008, when he returned to the Commonwealth of Puerto Rico for the first time since being selected for space flight. He spoke with youngsters at the Capitol and at the Bayamón, Puerto Rico Science Park, which contains a planetarium and numerous surplus NASA rockets among its exhibits, during his visit, which was announced by then-President of the Puerto Rican Senate, Kenneth McClintock.

On June 1, 2009, Acaba returned to Puerto Rico. During his visit, then-Governor Luis Fortuo presented him with a proclamation. He stayed on the island for seven days and met nearly 10,000 people, the majority of whom were youngsters.

On February 7, 2013, during one of his visits to Puerto Rico to promote the study of math and science among students, as well as to visit his relatives, he received the Ana G. Mendez University System Presidential Medal and an Honorary Doctorate from the Polytechnic University of Puerto Rico, where he inaugurated a flight simulator. He was designated one of the most prominent and fascinating Puerto Ricans in 2012 by Caras Magazine.